Portland’s Jefferson High — Why the Name is Essential 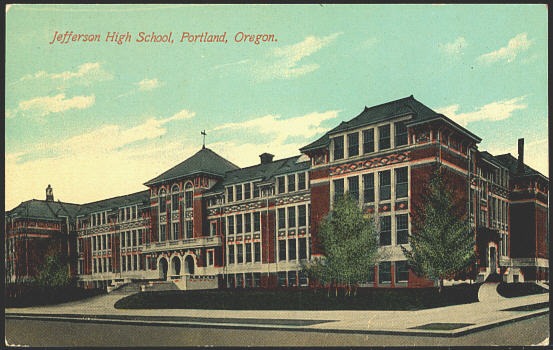 Over the years, the nascent movement to rename Portland’s Thomas Jefferson High School has bubbled just under the surface. Sometimes the heat gets turned up and the discussion breaks out again. We are, once again, in one of those moments.

I get it, don’t you? Some of America’s Founders were slave holders, Jefferson and Washington chief among them. Why would we want children, especially African-American children to have to attend a school named after a slave holder?

Across the country, especially after Charlottesville, civic leaders are confronted with the question of what to do with statues of Robert E. Lee and Stonewall Jackson. Almost instinctively, I thought they should be taken down. It’s a tough decision for elected leaders. As an amateur historian, I have to pause a moment to consider what we will lose if we willy-nilly start removing monuments and names of buildings that some find offensive. Consider Thomas Jefferson.

As a graduate student, I spent considerable time looking deeply at the Declaration of Independence. I remember standing mouth agape when I got to see it in person in Washington DC. My study was focused on the references to God in the document. The language just didn’t seem to square with what I knew about Jefferson’s Diest/Enlightenment philosophy. Many people don’t realize that we can actually look at the “Rough Draft” of the Declaration.

The Continental Congress assigned 5 members to write the Declaration. While Jefferson was the primary author, and extremely protective of his text, John Adams and Benjamin Franklin offered important edits. You can see them on the Rough Draft, in their hand. Still, the draft went to the entire Congress (the committee of the whole) almost completely with Jefferson’s original text.

Here’s one reason renaming Jefferson High School would do such a disservice to generation of students. In Jefferson’s original text he condemned slavery:

…(King George III) has waged cruel war against human nature itself, violating it’s most sacred rights of life & liberty in the persons of a distant people who never offended him, captivating & carrying them into slavery in another hemisphere, or to incur miserable death in their transportation thither. this piratical warfare, the opprobrium of infidel powers, is the warfare of the CHRISTIAN king of Great Britain. determined to keep open a market where MEN should be bought & sold, he has prostituted his negative for suppressing every legislative attempt to prohibit or to restrain this execrable commerce….”

That’s right, Jefferson, the slaveholder, wrote a condemnation of slave trade. This passage is ripe for discussion as he didn’t condemn slave ownership and referred to the white southern fear of slave revolt. However, his moral compass swung wildly, challenging the entire system in a draft of one of our founding documents.

The Committee of the Whole deleted all of Jefferson’s language on slavery and inserted references to God that he never contemplated. Why?

Walking into a school named after Jefferson presents the delicious opportunity to teach children critical thinking. By critical thinking I mean the challenge of holding two opposing thoughts in one’s head at the same time and drawing conclusions about what that tension means. Every building name, every monument, presents everyone with this opportunity. Excising building names and monuments is simply the sugar high of intellectual avoidance. “Safe spaces” are places where truly difficult conversations are suppressed. When these kids become adults (and before as we have seen in the actions against gun violence) there will be no place to hide from things that induce discomfort. We do them no favors by setting avoidance down in concrete.

A recent episode of 60 Minutes on Civil War monuments offered one of the most interesting takes on this issue I have seen. Richmond Virginia, the capital of the Confederacy, has a long monument boulevard anchored with huge statues of Confederate icons. The city’s black mayor has put together a committee to decide what to do with the statues. A member of that committee is an African-American professor from the University of Richmond, Julian Hayter.

Dr. Hayter makes the point that most of the confederate statues were erected at the height of Jim Crow laws in the south. The nation-wide explosion of Klu Klux Klan activity in the 1920’s also brought a surge of monument making.

Dr. Hayter said, “The Lost Cause, quite frankly, is just the Confederate reinterpretation of the Civil War. It’s created almost immediately after the war ends by Confederate leadership. it was hard for a lot of people, in my estimation, to believe that their ancestors died and– and fought for an ignoble cause. 600-and-some-odd-thousand people died in the Civil War. Which is more Americans than died in the second World War. And people had to make sense of that. Believers in the Lost Cause who raised money to build monuments in town and cities across the country were often veterans or their widows and children. Lost Cause ideology portrayed Confederate soldiers as heroes defending states’ rights against northern aggression, and downplayed slavery’s role in causing the war.”

Then Dr. Hayter took a turn that caught me by surprise. As a historian he wants the statues to stay.

“There are 75 million people in the south who are the descendants of– Confederate soldiers. And who I am to tell them that– they cannot celebrate their ancestor in a particular way? But I also have ancestors who were the victims of the slave system, and I see no reason why we can’t find a usable way to tell two stories, or tell multiple stories.”

There it is, critical thinking. He continued:

“I’m suggesting we do a little bit of historical jujutsu. I’m– right? I’m suggesting we use the scale and grandeur of those monuments against themselves. I think we lack imagination when we talk about memorials. It’s all or nothin’. It’s leave ’em this way, or tear ’em down. As if there’s nothin’ in between that we could do to tell a more enriching story about American history.

Historians call it recontextualization, the addition of signs or markers with information about when and why the statues were built to help people see old monuments in a new light.”

He is advocating for using our collective discomfort as a moment to pursue the truth of these monuments in a clear-eyed way, to destroy the myth-making with facts and turn the existence of labels and moments into perpetual teaching moments. He then came to the crux of what I think is the case to keep the name of Thomas Jefferson High.

“…the critical difference between Washington and Jefferson and Lee, and men like Lee, is that while Washington and Jefferson were com– complicated individuals– and by our standards– thought about ideas in– in an entirely anachronistic way– they also baked in the Constitution the components that allowed people to dismantle– the slave system. They built as much as they destroyed. I cannot say the same thing for the Confederacy.”

Dr. Hayter challenges us all to go into our anger and fear in order to seek the truth of a things as they were and are. This is rich, rewarding ground if we have the courage to walk it.