Who Are These Kids? #neveragain 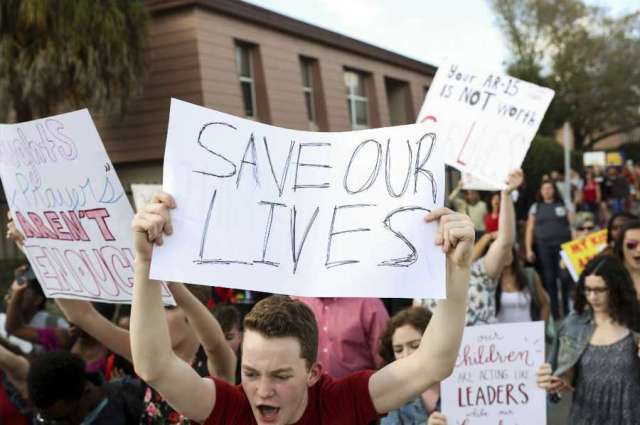 After the Parkland Valentine’s Day massacre, the first time I knew this was going to be different was when I saw those kids on television. I kept saying out loud, “Who are these kids?” Poised. Articulate. Smart. Grieving and fed up with the status quo, they are unwilling to accept that they can be randomly killed for the crime of coming to school. After I asked who those kids are, my second thought was, “These poor fucking kids. The evil that is coming their way. God, I hope they can survive it.”

The questions about them came immediately. But thanks to the Washington Post, we now know were those questions came from. It wasn’t just people being incredulous that they were so calm and well-spoken. No, the Post went deep into the internet and discovered a well orchestrated attack:

Forty-seven minutes after news broke of a high school shooting in Parkland, Fla., the posters on the anonymous chat board 8chan had devised a plan to bend the public narrative to their own designs: “Start looking for [Jewish] numerology and crisis actors.”
The voices from this dark corner of the Internet quickly coalesced around a plan of attack: Use details gleaned from news reports and other sources to push false information about one of America’s deadliest school shootings.
The posters on anonymous forums, a cauldron of far-right extremist politics… began crafting false explanations about the massacre, including that actors were posing as students, in hopes of blunting what they correctly guessed would be a revived interest in gun control.

That’s right. 47 minutes. Children were still bleeding out and the plan to discredit them was underway.

I worked on the early internet, when it was still a mostly academic idea. One of the happy concepts was that this new technology would allow people across the planet to come together to do great things. We were hopeful…maybe we still are…but we did not anticipate the evil that this new medium would enable. The trolls. The bots. The corruption of democracy. And especially, the desire to attack innocent kids.

Still, the high school kids kept at it. What the evil guys, the NRA and the politicians didn’t understand was that this event was playing out in their world, not ours. From their earliest days, these kids were handed devices connected to the internet. They live by and in front of their phones. They have been on camera for years, of course they are comfortable being interviewed. When attacked on Twitter their response is quick and devastating. After days of unbalanced Twitter warfare between sharpe witted kids and adults one Boston Globe reporter said, “Y’all don’t understand. This is their turf.”

The more I thought about the Florida kids and their talents and persistence it finally came to me that decades apart, I am them. My high school friends are them. Early on, I fearlessly debated adults. I gained more skills debating at the Model United Nations. My best friends were the editor of the school newspaper, the head of the debate team and a guy who wrote the most amazing biting satire. Put 21st century tools in our hands, kill our classmates and you think we wouldn’t be on CNN or organizing marches? Come on. Those kids are us.

The skinny, tanned kid who is a leader showed up on television is his debate team t-shirt. He is a reporter on the school television station and during the shooting, like a war reporter, used his phone to interview his classmates as they hid. He wanted a record if they didn’t make it. His buddy is a lead actor in the drama department. Does anybody really think, given the speed of their reaction to the murder of their classmates they needed to be coached? Oh sure, sometimes they say things that are completely over the top. They are just kids. But they are doing way better in this moment than many adults. Have you watched NRA TV lately? Talk about over the top.

I saw a vicious series of adult attacks on 3 of the kids were smiling and laughing in a video. The attackers asked, how could they be happy? Grief is funny sometimes. I joined 5 men in carrying my best friend to his grave. His grave is at the top of a hill. We were given the coffin to carry up that hill. Half-way up we were faltering. It was so heavy. Alone on our journey tip that hill, I turned to my compatriots and cracked a joke, “Damn it, I told John to lay off the pasta.” We all laughed and I know that is what got us up that hill. Grieving children get to smile now and again.

Have organizations who share their cause and goals now jumped in with money and support. Fuck yes! It is a crisis of the highest order that kids are dying in schools. Like any crisis, Americans are generous and supportive.

Unlike previous shootings, weeks after, the conversation continues to echo. Corporate America has seen the polling. Their customers want simple measures to restrict access to assault weapons. Suddenly, they too are unafraid of the gun manufacturers lobby. The Republicans will slow walk this and pray they have to do nothing. The president talks out of both sides of his mouth. Bottomline, these kids are not going away.

Finally, the trauma. It is so real for them. The Times made that point:

This is the reality that confronts students at Marjory Stoneman Douglas High School when the cameras turn off and the day’s rallies are over. They have won praise for their strength and eloquence on the world’s stage. But even as they raise millions of dollars and plan nationwide rallies, parse the details of assault-weapons laws and spar with politicians and conservative critics, the young survivors of the massacre are struggling with the loss of their friends and educators, and the nightmares that flood back in moments of stillness.

In trauma, you find the things you can control and you hold them as tightly as possible. The reason they have not been manipulated is because their words and their actions are the ultimate thing they can control. I can’t imagine anyone being able to take that thin tread of basic human survival from them. These are our kids, maybe the best we will every have the privilege to see and I stand with them.