Many Nights at the Ballpark 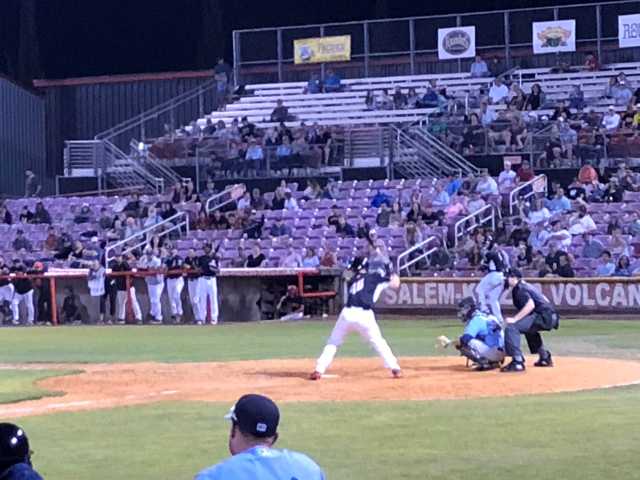 I have seen 21 live baseball games this season.  16 Pickles games.  4 Major League games and 1 minor league game.  The season isn’t over but I have most likely seen my last live game for the summer.  The local season is winding down.

Last night we were with friends watching the Salem-Kaiser Volcanoes.  The Volcanoes are the short season A ball farm team for my beloved San Francisco Giants.  We always make it down for a game so I can “scout” Giants prospects.  I have seen several current major leaguers play with the Volcanoes.  There is only one level of professional baseball lower than the Northwest League but not being in a major league town I have developed a lasting affection for the minor leagues.  These kids are often just out of college, or in the case of foreign born players, this is their first taste of the United States.  What they have in common is that this is the first time someone is actually paying them to play baseball.  There is a joy, a purity in that fact that permeates the low minor leagues.

We went down to Kaiser last night with a very specific purpose.  My Giants were so awful last year that they got the number 2 player in this year’s draft.  For the uninitiated, this is a big deal and means huge signing bonuses.  Joey Bart is a catcher from University of Georgia.  His signing bonus?  $7 Million.  Shocking isn’t it.  He is on a team with players making a tiny salaries, no bonus, surviving on fast food. But his talent warrants that much money.  That’s the market.

The levels of baseball are unlike any other sport.  Major League teams have 5 levels of teams below them.  It is not unusual for bonus babies like Joey Bart to never make the major leagues.  All that money is often a losing bet.  It is more likely an unknown kid from the Dominican Republic will be a star at the highest level.  Baseball is hard.  Even with all the talent in the world, Joey Bart was sent to the lowest levels to learn a game he has already been playing since he was 6 years old.  The Darwinian culling of players as they work up the ladder is cruel.

Joey was introduced before the game.  He was given a plague as the league player of the month for July.  A little speech.  Then back into his catcher’s crouch.  He was 0-4 for at the plate last night but threw out 3 runners trying to steal second.  What a freaking arm.

But while I was watching the Volcanoes in that lovely stadium in Kaiser (note to the file, for the 11th time Sally said we ARE NOT moving to Kaiser so I can go to all the games), I was looking at MLB.com on my phone.  The advent of steaming means I see or listen to about 150 Giants games a season.  I do it everywhere.  At the movies, in the car, while I am writing, while I walk the dog…everywhere.  As I was watching Joey and his mates, I was also watching my Giants blow themselves out of the playoff chase.  So, I switched the broadcast to the M’s to see if they were still in the hunt.  At games, I also follow all the beat writers for my teams on twitter.  (Wow, writing it down, I feel like a junkie admitting a drug problem.  But the high is so good….)

Why do I do this?  As a kid, I followed baseball.  I was desperate to play but as a gangly, uncoordinated kid who was afraid of the ball, that was never going to happen.  Still, I grew up a Giants kid in SoCal Dodger country.  Two reasons.  I once saw all of the greatest Giants at a Palm Springs spring training game.  I waved to Willie Mays in the parking lot.  He waved back.  And, there is the artifact. In 1962, my Granddad Kerby once played golf with the owner of the Giants.  After the round, the owner took my papa to the locker room and told the team to all sign some balls for his friend’s grandkids.  In a safe, I have that perfectly preserved ball.  Five Hall of Famers, Willie Mays, Willie McCovey, Juan Marichal, Ozzie Virgil and Gaylord Perry.  How could I not be a lifelong Giants fan?

Gaylord Perry, he of the spitball, was at the Volcanoes game last night.  This is a minor league thing.  Players show up and sign 2 things for each person in long lines.  Hundreds of people stood in line last night.  Older players were paid peanuts, so this is part of their retirement income.  Once at a Portland Beavers game, I got a signature from Cleveland legend fireballer Bob Feller.  I didn’t get a signature last night.  Perry’s signature on my ball was his rookie year, so there’s that.  I was also a little sad for him.  But as you walk around the line of supplicants you hear old men telling stories about their hero to young men and younger boys.  Transmitting tribal lore.  When Perry came out to throw out the first pitch, players, kids, many of whom who had to be told who he was, gathered on the dugout steps to applaud the Hall of Famer.  I realized they were saluting a shared dream as much as Perry.

If you haven’t figured it out yet, this blog is called No Clock because of my love of baseball.  When you are able to move beyond the causal fan, it’s the long spaces in the game you appreciate as much as the action.  A hundred little things happen between every pitch.  Infielders move, pitcher and catcher strategize on the next pitch.  Hitters adjust based on the count.  Once they see what the pitcher has thrown, infielders and outfielders shift their weight to anticipate how that kind of pitch will come off the bat.  And when runners are on, no game builds drama like baseball.  Slowly.  Relentlessly.  Especially in extra innings.  Why?  Because there is no clock.  You play until each team has all its outs and one team wins.

I like to go games alone to just absorb the play, but I always end up talking to some other fan.  If you get to go with a friend, the game allows the space to talk about a thousand different things.  You weave your friendship in and out of the play on the field.  While owners have to create between action distractions for the modern fan, you don’t have to pay any attention to the silliness.  The relative quiet in the breaks in the game are a godsend.  No singing, no drumming, no dancing, no clock, just the time to hang out in the stands with a friend.

When I was in City Hall, I was in the room for the negotiations that ended the 100 year run of the AAA Portland Beavers ball club.  It was agony and deeply personal.  From my first year in Portland in the mid-80’s, I was a regular at Civic Stadium.  Broke for the first couple of years, I could afford a 10 ticket General Admission pack for AAA ball.  Add 1 beer and 1 dog and I was in heaven.  During the AAA hiatus when we had the single A little Rockies, I was I high roller with 2 season tickets 3 rows back from third base and paid parking across the street.  In all that time in the ballpark, I had a jealous eye on a few people.  Every game, sitting in the same seats were a few old guys and one elderly woman.  At their feet was a beer and in their lap was a scorecard.  They were my icons.  That was who I wanted to be in retirement.  I was pretty angry when that dream was taken away.

Still, one of the things I did do in City Hall was take the first meeting with a wild eyed guy who wanted to bring a wooden bat college league to Portland in a park in East Portland.  I became a politically connected handmaiden to bringing baseball back to Portland.  A couple of weeks ago, my dad came to visit.  I surprised him the day he drove into town.  I fed him and told him to take a nap, we were going to see the Portland Pickles.  So on a warm summer night, I was one of those retired guys at the ballpark, beer in hand, sitting with an even older retired guy.  Even better than the dream.