Why Live Music Keeps Me Alive

I saw my first live rock show at 13 years old. In 1968, my mom dropped my buddy Gregg and I at the fair grounds so we could see Iron Butterfly. The opening act, from San Francisco, was called Floating Bridge. I remember almost everything about that show. We were two skinny kids sitting amongst real hippies. I smelled marijuana for the first time and recall the bizarre detail that a roadie came out and lit two pans of lighter fluid at the feet of the lead guitarist during the closing song, In A Gadda Da Vida. I knew then that I was in love for the first time.

Behind me, on my office wall, is a big poster I made of a time slice of ticket stubs. For decades, I would come home from shows and toss the night’s ticket stub in a desk drawer. Not all the stubs made it home, but almost a couple hundred did. (Some shows are just 5 bucks and a stamp on the hand and I hate tickets on my phone for this reason.) The first one is The Who from Washington DC in 1979. The last one is David Bowie in Portland in 2004.

The poster is my live music archeological dig. Rock followed by the 80’s where I was obsessed to find and see every living Delta and Chicago blues artist. (Yea, I saw Muddy Waters, BB King, Frank Frost, Robert Jr. Lockwood, James Cotton, Buddy Guy, Koko Taylor…I could keep going.) The 90’s I was back to rock with Riot Girls and Grunge bands. There was a new savageness in the post-punk artists that I still love. I wasn’t a Satyricon guy. I hung at Pine Street and La Luna. I loaded up on bands from the Pacific NW. Especially Portland bands. 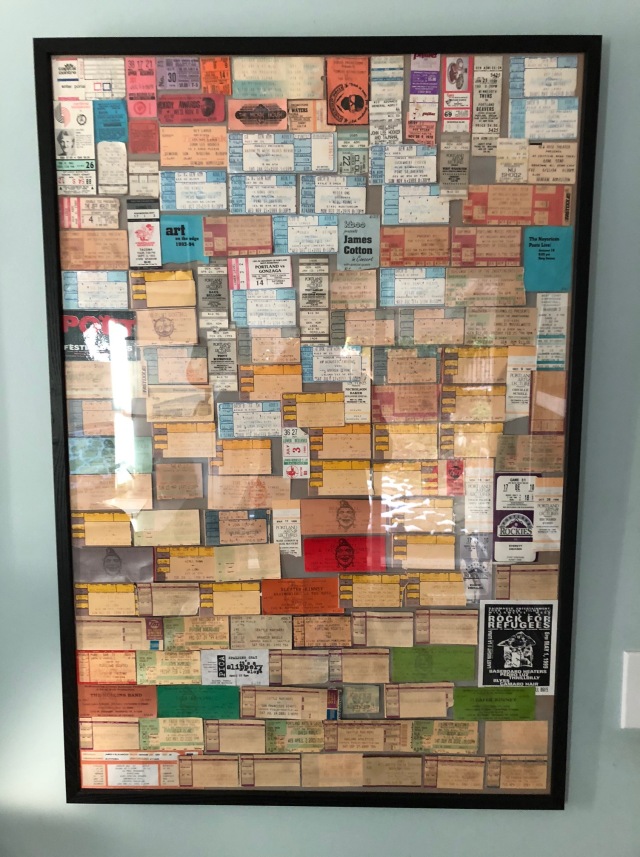 This could be just another fucking old man telling stories about the past essay, but it’s not. I long ago realized that live music is what feeds my soul. I knew that at 13. Most people who go out to clubs stop in their late 20’s. I have seen 4 generations of twenty-somethings come and go. Most think they are too old for that live music scene, which is often synonymous with having kids. I am my kid. I never stopped going to shows. I can’t imagine life without live music. When I am cranky and being a jerk, my wife orders me to go to a show and clear my head.

My two oldest nieces are exceptions to the stop seeing live music rule. I like to think I had a hand in that. When the oldest was 13, I took her to a Pond show at La Luna. She was adorable, dressed up on a party dress, a stark contrast to the local kids dressed in black and smoking clove cigarettes. The next niece I took to an X and Supersuckers show at the Starry Night (now Roseland). It was so hot that my glasses fogged up when we walked up the stairs and I think we both marveled that in a black leather jacket Billy Zoom did not sweat. I told her I was sure he was actually a lizard.

There are moments at shows were I get to leave my mind and body. The always present background hum of anxiety suddenly melts away. A chill starts in my legs and goes to the top of my head. I feel the base notes and drums pounding into my chest. The lead guitar massages my body in waves. And, with no thought, I am smiling, even laughing out loud. If I was a mystic, I would say I was having a moment of ecstasy. No drugs. All welling up from the experience, a truly Zen moment.

Earlier this week, joined by my partner in crime Bob, I was at a Mary Timony show at Mississippi Studios. She is from DC and has an amazing lineage in independent rock. I saw her once in the shot-lived Riot Girl supergroup Wild Flag playing next to Carie Brownstein. From the first song, Bob and I looked at each other wide-eyed, both knowing we were seeing something special. Three songs in I got that chill sensation. I wasn’t the only one. Unlike a lot of shows these days, there was no sea of cell phones filming and taking pictures in front of me. People were just there, in the moment.

You have to know music to know what she and her amazing band were doing. Forehead to forehead with her rhythm guitar bandmate doing duet that was a spot on imitation of Duane Allman and Dickie Betts. Later, neck trapping like Eddie Van Halen. A cover of a song from a Joe Walsh album that 13 year old Jim had in his collection. (Uh, still does.) And, just to show her DC roots, a punk version of one of her Helium songs that would have made Minor Threat proud. Sometimes being an old dude watching a great artist is pretty cool when you have all those music references in your head.

I once violated what my love of music was trying to tell me. I decided to do my 40th birthday at La Luna seeing the all woman hurricane called Babes in Toy Land. I invited everyone from my first batch of Portland friends. I later learned that most of them got to the door, heard the band and didn’t come in. They were already too old for that. I should have dumped them then, not years later.

The two people who did come in for the show are a woman who is still one of my wife’s closest friends and my dear departed John. He was late, as usual. He found me upstairs and handed me a ballpoint pen and said, “Happy Birthday.” Uh…what? “Open it,” he said. Inside was a joint replacing the ink. He pulled out a lighter and we got high while watching the Babes. (No time here for the full tale about how he got the joint from Gus Van Sant after giving him a ride up to his house.)

If you have something that you love, then love it. Other people’s perceptions about how to age and what you should be doing are simply nonsense. See you at a show. I’ll be in the back drinking Irish whiskey and waiting for the wave.

1 Response to Why Live Music Keeps Me Alive