Life Among the “NIMBY Racists”

More people are coming.  How many times have we heard that?  When I drive around Portland I sometimes get a little lost because my memory landmarks are gone, replaced by a monoculture of 5 story apartment buildings.

An ugly fight has emerged over density in the old R5 zoned neighborhoods.  My neighborhood.  There are people, like me, who some time ago made the biggest investment of their lives in a single family home.  On the other side of the argument is the curious coalition of  low income housing advocates and developers.  I was in City Hall for the planning battle between those two sides.  In many cases the division was between younger apartment dwellers and people like me.  It got nasty.  The agist rhetoric flowed freely.

So where are the adults in this policy argument?  Evidently, not in Salem. The Speaker of the House, Tina Kotek referred to home owners as NIMBY racists.  Well that’s helpful.  The use of the word “racist” a now a liberal trope.  It’s how you marginalize even the most rational opposition to public policy.  The policy discussion then becomes an attempt to refute the claim.  I saw the term used like this in City Hall over and over.

Historical racism in real estate is a fact all across America.  Portland is not unique.  When   the Portland Development Commission started to remove “blight” they started downtown knocking down entire Italian and Jewish neighborhoods, then crossed the river and went at historically black neighborhoods.  Then it was all about location and money.  Racism is woven in that story but for developers cultural context is secondary to the dough.

The clue about what is really happening here is that fact that developers are part of the housing coalition.  There is money to be made and if playing the role of housing advocate gets that done, so be it.  Tearing down a small starter homes has been very profitable for some time now.  Building duplexes would be even better.  Buy a home for $350,000, tear it down the foundation, double the square feet and you have an $800,000 home.  Better yet…turn that same footprint into a duplex and you have two $600,000 homes.  You tell me.  Are developers building “affordable housing” or are they systematically eliminating the affordable housing in R5 neighborhoods to make a buck?

Who are the NIMBY racists?  Is it the Asian woman across the street whose father built a home on that lot a decade ago?  How about the other neighbor (retired public union employee Tina) in the little 1920’s house who bought it in 1980 for $20,000?  Are the racists the two teachers with kids who live next door and bought a small house just before the latest boom?  What about my neighbor on the other side, the other retired state worker and his wife?  Many of us bought the houses we live in for prices the seem impossible for newcomers to imagine.  For the most part, post-redlining in what were once almost entirely working class neighborhoods 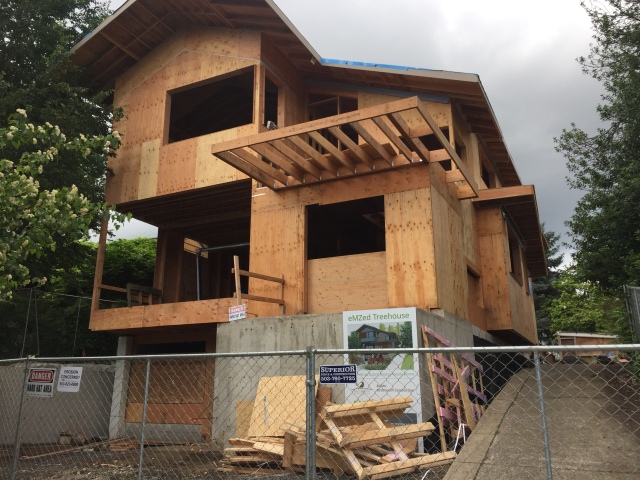 Right now, I can hear construction noise on my block.  A family from California is gutting a nice house to upgrade it.  They bought it for $800,000.  Another 1906 house is on a double lot.  The software guy is moving it to the second lot and building a entire new home on the now vacant lot.  A little further down, a nice starter house has been gutted and a second story is being added.  It will fetch $700,000 when they are done.  My longtime neighbors and I stand in our front yards shaking our heads.  Where is all this money coming from?

When I got my first apartment in an old house in inner SE in 1983, I roamed around amazed at how lovely and cheap the houses were in these close-in neighborhoods.  People I met from the west side turned up their noses to crossing the river and buying a home there.  I dreamed of owning one of those houses and 10 years later, having scrimped and saved, I bought a tiny starter home.  It is just the kind of home that is being eliminated.  No matter how you carve up these neighborhoods with duplexes and four-plexes these neighborhoods will never be affordable again.

I saw a METRO survey that said that when asked over 60% of Portland millennials aspired to a home with a yard when they paired up and had kids.  Of course.  We have not revoked the American dream.  But I’m sorry.  In Portland, you missed it.  Every political decision we have made in the last 30 years has led us to this outcome.  Yea!  We did it to ourselves.

This entry was posted in Uncategorized. Bookmark the permalink.